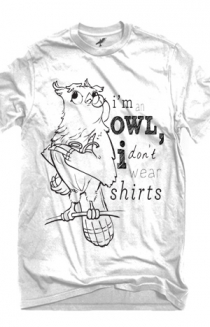 Once upon a time, Shawna did a survey of her Twitter followers, asking them a bunch of questions about what they would like Nanalew shirts to look like. Because it made her laugh, Shawna made sure that the last option for each question had nothing to do with shirts, but centered entirely around owls -- the most popular of these options being, "I'm an owl. I don't wear shirts." In the end, so many people said they wanted this particular shirt that she ended up making it for them (and herself). Mr. Owl may seem a bit stodgy at first, but he is quite nice once you get to know him; and he would very much like to go home with you. Plus, he is fluffeh. Oh yes.