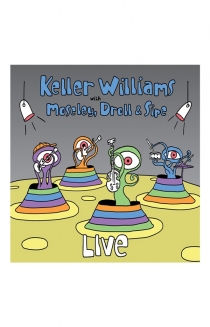 Keller Williams has built a career on his uncanny ability to captivate a packed house all by himself. So why now, after fifteen-years as a solo artist, is he releasing a live album simply titled, Live with three other names on the cover? It turns out that since he first picked up a guitar, this troubadour has wanted to front a band. On Live (September 2008 / SCI Fidelity Records), Keller taps into the world-class talent of Keith Moseley (bass The String Cheese Incident), Gibb Droll (guitar Marc Broussard, Brandi Carlile), and Jeff Sipe (drums Aquarium Rescue Unit, Leftover Salmon). The musical horsepower of four friends playing together on stage proves stronger than even Keller had dreamed. Recorded at select live shows during a winter 2008 tour, and featuring seventeen tracks that span Kellers career, Live is a testament to how a band, with the right chemistry and chops, can take a song to places even the writer couldn't have imagined.