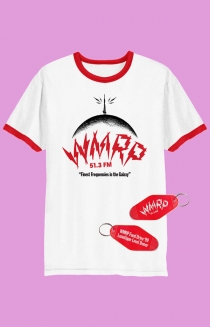 In August, 1969, shortly after the United States won the race to the moon, a public radio station popped up in the Cincinnati area - WMRP. WMRP was maverick radio. Proudly refusing to conform to any one format, the station claimed to play the "indie-pop-fiesta-alt-rock-adult-contemporary hits of tomorrow... today!" And that about summed it up. WMRP was just WMRP. In late 1999, in the middle of their annual fund drive, the station's signal - which had been reliably broadcast into tristate homes from the isolated-as-a-man-in-space frequency of 51.3 for thirty years - suddenly, without warning, ceased. While we can't say exactly what happened to those aural pirates of the FM dial, we were able to recover a number of these "Lunatique" level donation gift packages left over from twenty years ago. Available to you now - the "Finest Frequencies" t-shirt and Fund Drive keychain. Orders may take up to 4 weeks to process, but, hey, we're bringing this stuff in from the 90s.