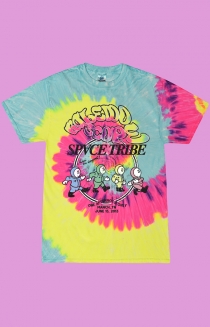 You never know what's going to happen on that farm in Manchester.

Six years ago this week, folks claim they experienced mid-afternoon aural phenomena in a field in Tennessee, when a never before seen band of entertainers took a small side stage for the first and last time. Sure, some say they were seen again some weeks later up Cincinnati-way, but I ain't never ascribed to that.

After the visitors' half hour of strangely familiar sonic wave manipulations, all that was left behind were these shirts, 'n they didn't leave many, so if you want one, come n get it.

One afternoon only. Heh. Guess that must have been the place, that particular afternoon.