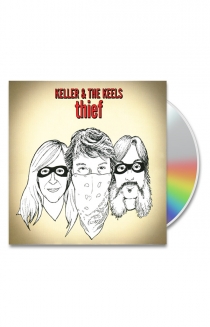 Thief is Keller's 15th release and the 2nd collaboration with the "out-of-sight" husband and wife duo of Larry and Jenny Keel. Keller and the Keels went into the studio for a few days in December 2009 and crafted a masterful follow-up to their popular 2006 album Grass. Comprised entirely of unique bluegrass renditions of songs originally written and recorded by a diverse group of musicians such as Kris Kristofferson, The Butthole Surfers, Ryan Adams, Amy Winehouse, The Raconteurs, Marcy Playground and many others, Thief is sure to surprise you in the most foot-stomping and knee-slapping way. Get yourself a copy of Thief and rediscover how, regardless of whether a song is penned by Keller or The Presidents of the United States of America, it somehow becomes his own.